​I am thrilled to announce I’ve become an AWARD WINNING AUTHOR for my book, Our Sunburnt Country.

A recognition honoured by the Royal Societies of Australia and New Zealand for ‘outstanding writing on social change.’

I’m truly grateful to all who made this possible.

Writing a book is no easy feat.

Months upon months reading literature on the climate crisis and biodiversity loss that brought tears to my eyes.
Weeks upon weeks reaching out to people for interviews and follow-ups.
Days upon days of staring at my computer screen until strained eyesight gave me headaches.
Hours upon hours of solitude and stretching out my hip that had seized up from being stationary and which seared in pain.
Self-doubt questioning whether “will all this work ever be published?” and “would anyone read it anyway?”

But I’ve had the most incredible writing journey and met the most inspiring people on this path.

I’ve handwritten cards of gratitude to hundreds of people.
Have spoken on stages to thousands more.
I’ve posted my book to over 30 countries.
And sent it to over 45 members of Parliament.
I recorded my audiobook in a homemade mattress studio in the middle of lockdown with a recording team across the country.
Published in Large Print and Dyslexia Font, and made a video in Auslan for the Deaf, because I truly believe all people must be included in these conversations.

I am just one of the millions of farmers around the globe who are doing all they can to look after their homes and farming communities.

The climate crisis is severely impacting farmers today, but there are abundant ways we can tackle this problem and create a better world.

This is a story that needs to be heard.

I dedicate this Award to all the farmers.

Thank you to the Royal Societies of Australia and New Zealand for awarding me the Bruce Piasecki and Andrea Masters Award for Writing on Social Change.

I am honoured to be the Author of my AWARD WINNING BOOK, Our Sunburnt Country. 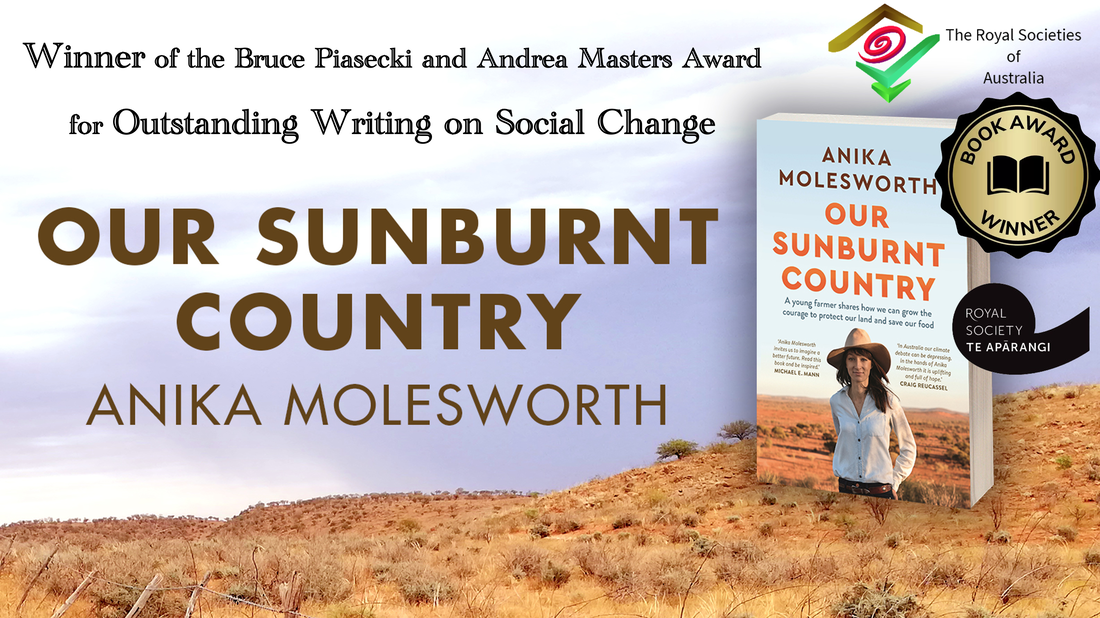 ​
Homo sapiens. In Latin, meaning ‘person of knowledge’ / ‘wise person’.
​
Do we live up to our name?

We are a unique species for many reasons, but one characteristic that separates us from other animals is our ability to act, with intention, for good or for evil.
We are the only species that can, with purposeful pursuit, design and inflict terrible suffering on others. We are able to plot atrocities and strategize actions to cause long-term horror and terror, abandoning moral codes and social wellbeing. We are the only animal species with full understanding of how certain modern behaviours are killing our planet, and yet continue to do so for whatever illusion we can justify those actions with – mainly economic – and the power and privilege we assign to uphold such delusions. We can poison rivers and lands, we can torture and exterminate any species, including our own, for no social gain or self benefit, but just because we feel like it.

We can act with pure evil.

We are also special because we are a species capable of true altruism. We can give care and compassion, protection and our very life, to look after another, even those we have never met. We are capable of understanding the complexity and intricacy and intimacy of ecosystem interrelations, and with intention set about re-sewing the strands of the web of life. We can stabilise the climate, we can regenerate biodiversity, we can create social justice. Homo sapiens can use their knowledge and wisdom to act in a coordinated and collaborative manner to restore beauty from ugliness, lightness after the dark.
We are capable of choosing good.

Despite the evils that we know of and experience, we are a species capable of holding onto optimism. The belief in goodness, and that goodness can prevail. That the long moral arc bends towards justice and compassion. To be optimistic is to believe in humanity’s intrinsic ability to choose to live by our better natures. That we can create a better world. 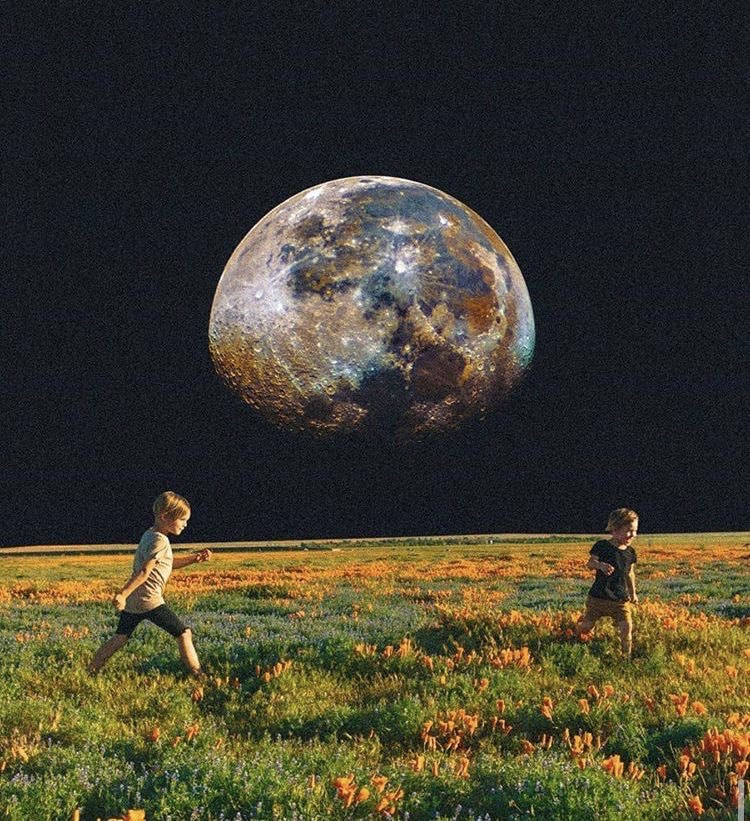 
Let me jump to the crux of this article;

It is NEVER OK to bully someone or tell them to take their life.

This week I’ve experienced a bombardment of online hate messages.

Bullying, harassment, trolling, cyber stalking… whatever one labels it, it is NEVER OK.

I tweeted on Monday and then went offline to do farm chores. We have some students out here this week getting amongst nature, as well we are constructing a wildlife rehabilitation enclosure… so there were tasks to do away from the screen.

It wasn’t until later when I received two messages in my inbox that I realised something was going on. One email read, “…be assured you are not alone”, and the second one read, “…F* you and your cult.”

I went back to my online post. Attached to it were hundreds and hundreds of comments, and unfortunately, a lot of them could only be described as vile ugly hate-spitting.
​
​Now, I want to make this clear; I’m not writing this piece for sympathy or a pat on the back. I am writing this because I want to make the following point as clear as day…

Bullying and telling someone to take their life is NEVER OK.

Not now. Not ever. Not for any topic. Not to anyone. It is NEVER OK.

I also believe that bullying should not be ignored or swept under the rug.

It should be called out and castigated for what it is; abhorrent.

The toxicity around climate change that has been popularised and normalised by some politicians, public figures and media outlets is totally unacceptable. These people and platforms have encouraged the hate-spitting. They have cheered it on. Why? Because division and fighting, ‘them versus us’, distracts from the main issue; the matter of actually doing something about the climate crisis. And they also do it for the cheap twisted thrills that bullies get from inflicting hurt on others and for the attention and sneering grins by their cowardly followers.

Not a single one of the hate-spitters actually asked me to elaborate on my post; to understand the layers of meaning behind the words, what prompted me to write it, or why the photos had been taken or even where they were located. No curiosity, no desire to understand, just a pre-formed opinion with heavy bitter judgement and spite.

If someone had asked, I would have explained that I posted this because I recognise that I am very much part of the global human collective, a contributing member of the human system causing anthropogenic climate change, and I acknowledge my responsibility as an individual to try to look after our social and environmental systems, as challenging as it can feel at times. I would have explained that the photos were taken during a heart-wrenching drought, a drought that led me to get counselling and the science tells me these dry times are getting worse because of climate change. The photos were taken on my family’s farm, a place I had described in my previous tweet as, “My home reminds me every single day why I fight for climate action. To protect this incredible, beautiful, fragile planet and all the life it holds.”

But no one asked.

Amy Jayne ‘Dolly’ Everett was from a Northern Territory cattle farm.
She took her own life when she was just 14 years old due to ongoing bullying.

Dolly’s parents set up ‘Dolly’s Dream’ to start a nationwide conversation about the devastating effects of bullying, because suicide is the highest killer of young Australians. And young people are nine times more likely to die by or consider suicide when they have been bullied.

Dolly’s Dream is committed to changing the culture of bullying by addressing the impact of bullying, anxiety, depression and youth suicide through education and direct support to young people and families.

It is a cause and a dream that many rural people I know hold closely in their hearts.

If you are being bullied or are witnessing bullying; speak up, let someone else know, call it out, and seek professional support.

On social media there are ways to report and block accounts. Do it.

Be kind. Be kind to yourself, to others, to the natural world around you.

I will continue to be myself and believe in myself, surround myself with good people, and be grounded by the rural landscape around me. And every day I will continue to work on issues that I know are important. I will help address the climate crisis with the millions of others, and I will condemn hate and division for all its ugliness. We have a beautiful planet to look after and each other to take care of.

For in the words of Dolly, “Speak even if your voice shakes.” 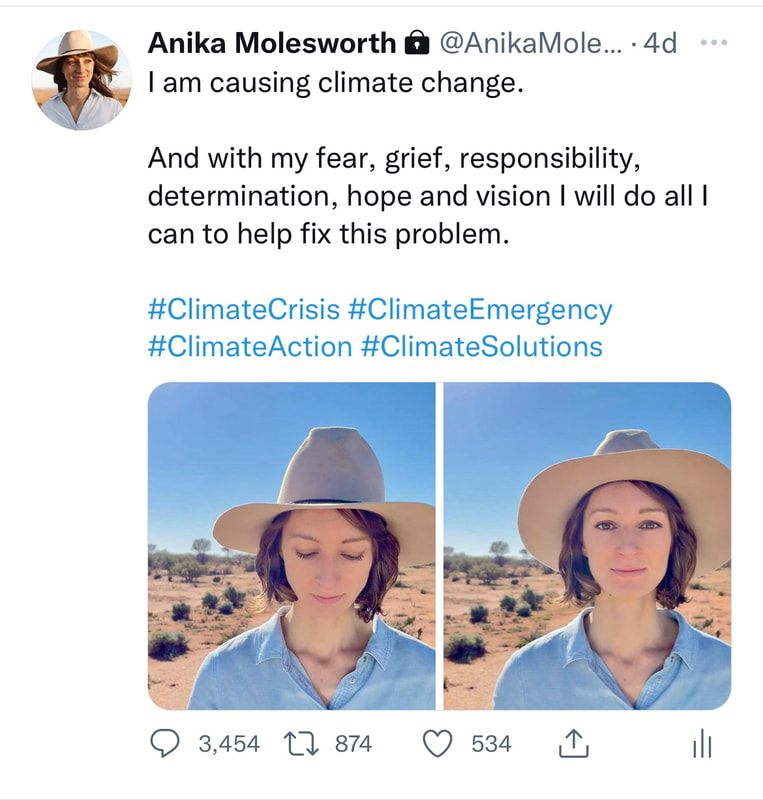